Among the best herbs are rosemary, mint, basil and especially lemon balm –not pictured because it’s hard to find these days. A local grower promises he’ll have some in a few weeks.

But first, meet Dr. Jeanne M. Wallace– a PhD in nutrition specializing in diet and cancer and “among a small handful of gifted practitioners who has succeeded in synthesizing the complex and wide volume of available research in the field of integrative care.” (That’s Dr. Keith Block, MD, of Chicago’s Block Center for Integrative Cancer Care.)

Thankfully, Wallace is now turning her attention to synthesizing the research on nutrition and viral disease. END_OF_DOCUMENT_TOKEN_TO_BE_REPLACED

HOW TO APPLY CONCEALER?  As with all makeup, blending well is the key. Add some foundation and loose powder, and you’re decades younger.

HOW TO GET THAT SMOKY EYE LOOK?  Spend 5 minutes with Montreal’s beauty expert,  Annie Young.

Anxious? Can’t sleep? Try some Lemon Balm, a member of the mint family. Steep a teabag–or better yet, 1/4 to 1 teaspoonful of the dried leaves–in hot water, and drink up to 4 times daily. Hyperactive kids may also benefit. The dosage for a 75 lb child is 1/2 of the adult dose.

You can also grow Lemon Balm in your garden. Careful, though: Like its mint relatives, it gets wild and crazy, especially when left unattended.

Cautions: Don’t use if you have a thyroid condition, glaucoma, benign prostatic hyperplasia or hormone-sensitive cancer, if you’re taking antidepressants, sedatives or alcohol or if you’re pregnant or nursing. Always consult your doctor first.

Have you had your vaginal ultrasound lately?

Ovarian cancer  is labeled “the silent killer” because its symptoms are often silent (gas, bloating,  for example, which many of us often contend with.) When it’s finally detected,  it’s usually  in the latter stages. Vaginal ultrasounds can detect ovarian cancers sooner than later, and doctors and public policy makers are now studying the relative value of adding them to the screening list.

You don’t have to wait for the experts to decide if the costs to society are worth it. The test is quick and easy. You go,  girl, right to your doctor, and ask her to have a good look inside–before it’s too late.

Note: For the lowdown on salmon, visit http://www.eatandbeatcancer.com. The bottom line is that pink salmon–yes, the kind you find in cans–is the cleanest.

As fish go, some are good for you, due to their high levels of Omega- 3 fatty acids, and some are suspect, chock full of heavy metals and chemicals from polluted waters.  In general, look for cold-water fish from clean waters and  for relatively small, short-lived fish that eat lower on the food chain, hence are less contaminated.

Here’s a list of some common fish to help you choose the healthiest ones that are not endangered.  Be careful how you cook them, though. Frying in oil will create harmful transfatty acids. Adding herbs, lemon and spices, rich in anti-oxidants, protects the Omega-3 fats during the cooking process.

Check out www.thegreenguide.com for more details, and note that this list was compiled without regard to the environmental impact of fish farming and prior to Japan’s Spring 2011 disaster.  That’s another story–or three. For now, avoid fish from Japanese waters and large migratory fish from the  Pacific–primarily tuna,  which could potentially feed on smaller fish and plants in Japanese waters.  Japan’s government has been reporting radiation in many species of fish.

● Choose a phone with the lowest SAR rating (specific absorption rate; it measures the strength of the magnetic field that the body absorbs.)  Check the web for SAR rankings of various phones.

● The strength of the magnetic field increases exponentially as the phone gets closer to the body.  Keep it as far away as possible.

● Use the speaker phone or a wireless Bluetooth headset or a hands free kit with an air tube in the last 8 inches.

● Biological effects are related to length of exposure.  Use the phone just to establish contact, limit length of talks, and call back on a landline phone with a cord. (Cordless ones use microwave technology similar to cell phones.)

● Wait until the other person picks up before putting it to your ear. This will limit the power emitted by the electromagnetic field.

● Better yet, use text messaging to communicate (thereby limiting proximity to body and length  of exposure.)

● Do not use a cell phone in a moving vehicle or when the signal is weak.  This will increase the power to its maximum because the phone keeps trying to connect to a new transmission antenna.

● Don’t carry a live phone on you constantly, even in standby. Don’t keep near you at night.  Put in “flight” or “offline” mode to stop electromagnetic transmissions.

● When you do carry it, make sure the side with the keypad is towards your body and the back side is away from your body. The back side is the antenna side and creates a stronger magnetic field.

● Stand far away from a person using a phone, and don’t use yours in public places where you can expose others to your phone’s electromagnetic fields.

Need a quick energy fix? Do a couple of rounds of these easy breathing exercises. Beware: They can make you look ugly. 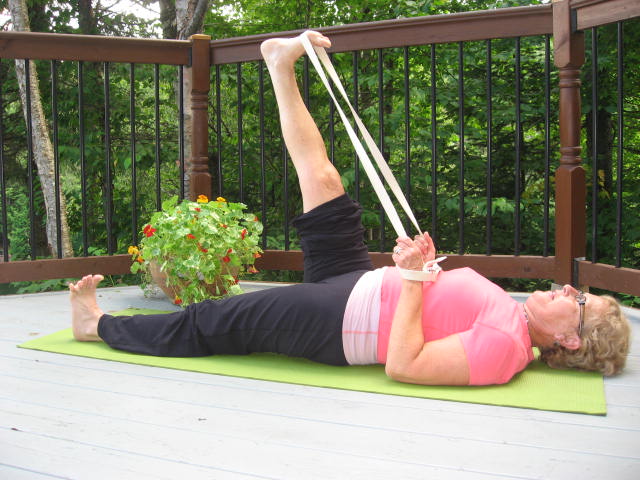 Place the strap around the ball of your foot first. Bend the strapped leg and slowly extend it. Pull down on the straps. Imagine that each foot is pressing against a wall. (You can even press your lower leg into a real wall.) Keep feet parallel, not turned out.

If your back hurts, bend your leg.

Make sure your lower thigh is pressing into the ground. If there is a big gap between the back of your thigh and the floor, take a cushion or blanket and place it underneath.

Don’t crunch your shoulders, like Angi is doing here.

Point your baby toe up, then point your big toe up. Keep alternating, moving smoothly back and forth. Then point and flex the foot a few times. You should feel the stretch all up and down your leg. Now do your other leg.

Place the strap around the ball of your foot first. Bend the strapped leg and slowly extend it. Pull down on the straps. Imagine that each foot is pressing against a wall. (You can even press your lower leg into a real wall.) Keep feet parallel, not turned out.

If your back hurts, bend your leg.

Make sure your lower thigh is pressing into the ground. If there is a big gap between the back of your thigh and the floor, take a cushion or blanket and place it underneath.

Don’t crunch your shoulders, like Angi is doing here.

Point your baby toe up, then point your big toe up. Keep alternating, moving smoothly back and forth. Then point and flex the foot a few times. You should feel the stretch all up and down your leg. Now do your other leg.

Green tea is rich in catechins, which reduce the proliferation of blood vessels needed for tumors to grow and metastasize. It also acts as a powerful antioxidant, activates enzymes in the liver that help rid the body of toxins and facilitates the death of cancer cells. (Black tea, on the other hand, is fermented, which destroys catechins.)

Buy either the Japanese leaves (They’re considered the best)* or the Chinese Dragonwell brand, and drink a few cups a day (Some say 2-3; others say up to 6.) It does have caffeine (about 20 percent the amount in coffee),  so don’t drink it on an empty stomach and switch to decaffeinated in the p.m. Caffeine raises your blood sugar.

Here’s how to make the perfect cup:  Bring water to boil, and then let it settle down for a minute or so ‘til the bubbles disappear.  Add leaves (2 grams/.07 ounces per cup, but you don’t have to be so perfect), and let them steep for 10 minutes so that they release the catechins.  Drink within the hour; with time, the steeped tea loses its catechins. You can re-use the leaves later in the day for a second  cup.

*Author’s note: Since the writing of this post, Japan has unfortunately experienced a nuclear disaster that leaves its food supply in question.  For the moment, you’ll probably want to find an alternative source–from Sri Lanka or India, for example.

As we glow older, the tissues in our vaginas start to thin, and dryness takes over.  A safe solution: Vitamin E vaginal suppositories.  Twice a week over several months should do the trick.

You can order them on the net, or check out your pharmacy. Some pharmacists will even compound them for you. (Visit www.iacprx.org to find a compounding pharmacist near you.)

Just make sure the suppositories are made of the complete, not partial, Vitamin E– and  pick up a few sanitary pads to go with them.

Another option–calendula, which also comes in suppository form. Studies have shown that  extracts of calendula, a type of marigold, have various healing properties.